Awami League General Secretary and Road Transport and Bridges Minister Obaidul Quader today said the struggle to build a ‘Sonar Bangla’ under the leadership of Father of the Nation Bangabandhu Sheikh Mujibur Rahman is going on under the leadership of his daughter Prime Minister Sheikh Hasina. He came up with the remarks while talking to reporters after placing wreaths at the graves of Bangabandhu and other members of his family at Banani graveyard on the occasion of the National Mourning Day.

The minister said the country is moving ahead under the leadership of Bangabandhu’s daughter Sheikh Hasina with the goal of a developed and prosperous Bangladesh by 2041. The next target is Delta Plan 2100.

Mentioning that Prime Minister Sheikh Hasina has been struggling to fulfill her dream as the legacy of Father of the Nation Bangabandhu Sheikh Mujibur Rahman, Quader said the Awami League will live in the hearts of the people of this country for ages as a political party that led the struggle for independence and liberation even if Bangabandhu is not there.
Dhaka, Monday, August 15, HBNews24.com.

PM pays homage to Bangabandhu by placing wreaths at his portrait 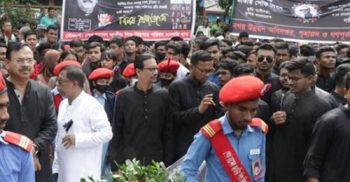