Today, August 15, is The National Mourning Day. On this day, a dark chapter was written in the history of Bengalis through the assassination of Bangabandhu Sheikh Mujibur Rahman, the architect of independence, the supreme commander of the Liberation War, and the father of the Bengali nation, along with his family. On that day, the entire Bengali nation was tarnished by some unruly misguided members of the army. On that night, the father of the nation’s chest pierced the historic building of Dhanmondi Road No. 32 with the ruthless bullet of the killer.

After 21 long years, when The Bangladesh Awami League formed the government in 1996, the Bangabandhu murder case became active. The final verdict of the court came into effect on January 27, 2010. Six of the killers have been executed and five are still absconding. Another died while abroad, but there is no evidence yet.

National Mourning Day and 47th martyrdom anniversary of Bangabandhu will be observed in different programs. The Bengali nation, irrespective of caste, creed and religion, will observe the day with deep respect. Different political parties, including Awami League, and socio-cultural organisations have chalked out various programmes on the occasion. National and party flags will be flown at half-mast and black flags will be hoisted. At 6:00am, wreaths will be paid to the portrait of Bangabandhu at Dhanmondi-32. At 8:00am, ziarat, fateha recitation, munajat and milad mahfil will be organized at banani graveyard. Besides, fateha recitation, milad and doa mahfil will be held at tungipara at 12:00am besides placing flowers at the grave of Bangabandhu.
Dhaka, Monday, August 15, HBNews24.com.

Another 218 new corona infected patients have been identified and 2 people have died. 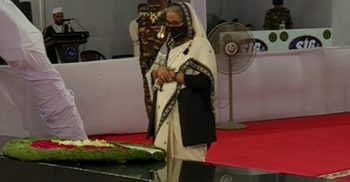 PM pays homage to Bangabandhu by placing wreaths at his portrait