Five journalists were injured in separate incidents in Lalmonirhat while performing their professional duties.

Four of the injured were admitted to Lalmonirhat Sadar Hospital on Friday evening.

According to locals, Sultan Mondal, 38, the father of two children, the younger son of Panchagram Union Awami League President Azizar Rahman Mandal of Lalmonirhat Sadar Upazila, got involved in an affair with a neighboring housewife. A few days ago, Sultan Mandal went missing with the housewife. The woman’s family lodged a complaint with the police.

Four journalists went to the spot on Friday afternoon to collect information about the incident. After collecting information, Azizar Rahman Mondal and his elder son Shahed Mondal suddenly blocked their way near Sultan Mandal’s house. At that time, Shahed snatched the cameras from the hands of the journalists and vandalized them and started beating the journalists randomly with a typhort. Later, locals rescued the injured journalists and admitted them to Lalmonirhat Sadar Hospital.
Mahfuzul Islam Bakul, a correspondent of THE TV’s Lalmonirhat unit, said shahed suddenly came and blocked the road and snatched the camera and broke it. Before he could understand anything, he started beating us randomly with Typhort. Law enforcement agencies have been informed about the incident. If recovered, a written complaint will be given.

District Awami League General Secretary Advocate Matiar Rahman came to see the journalists at the hospital. At that time, he strongly condemned the incident and directed the law enforcement agencies to arrest the accused immediately.

He also said that though the accused are from Awami League, organizational action will be taken against them.

Meanwhile, anwar Hossain, a former policeman of the area, is cutting down a government tree on the side of the road next to Sindurna No. 1 Government Primary School in Hatibandha upazila on the same day. Robiul Islam Robi, the hatibandha correspondent of The Daily Ajker, was attacked by Anwar Hossain while taking a picture of him.

Leaders of various journalists’ organisations have expressed concern over the attack on journalists while performing their professional duties and demanded the arrest of the accused.
Lalmonirhat, Friday, August 12, HBNews24.com 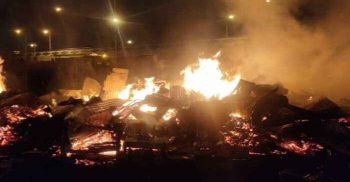