BNP wants to turn the country into a failed state through politics in a planned manner.

Awami League (AL) General Secretary Obaidul Quader today said BNP wants to turn the country into a failed state through politics in a planned manner. “If Awami League workers take to the field, they will not be able to find the streets, but also the BNP oligli,” he said.
Obaidul Quader made the remarks while briefing reporters at his residence in the capital on Friday morning. Regarding the BNP leaders instructing their workers to occupy the highway, the Awami League general secretary said, “The highway is not the ancestral property of anyone, the highway is the property of the people, so if chaos is created again in the name of occupying the highway like in the past, then a befitting reply will be given with the people.”

Obaidul Quader told the BNP leaders that the Awami League will soon be seen on the streets, saying that the BNP’s attack is only a tactic to show people, to keep the workers strong, their failures are nothing but a tactical attempt to cover up.

Obaidul Quader said bnp wants to go to the government and create a free opportunity to loot again, build hawa bhaban and block the path of the country’s immense potential and walk on the dark path.

“As the most failed opposition party in the history of this country, BNP itself wants to turn the country into a failed state, putting the country in crisis and fishing in murky waters. BNP is a political party without confidence in the people.

“BNP wants to go to power but is afraid to go to the polls. The BNP secretary general will not go to parliament after being elected and will send others to parliament.
Dhaka, Friday, August 12, HBNews24.com. 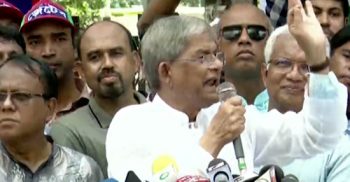